The practice of forgetting

I don't know if you read Umberto Eco's Foucault's Pendulum. I just started reading so I don't know what to make of it yet but so far, it created some beautiful glimmering moments for me. One of them happened to be where he was discussing the difference between digital and manual writing. That subject itself, nevertheless related to this one, deserves a whole other essay which I plan to write on the comparison he made on possibilities of digital vs. manual writing where he sided with digital, rightfully and beautifully arguing that act of writing on digital media enables one to create universes "where sharp lines in space and time do not exist" due to various abilities such as the speed, replacing words at the press of a key, deleting and recalling as opposed to the "linear" process of manual writing. Basically, he praises digital media for its ability of forgetting. Here is a beautiful passage to enjoy while making things clear.

"Repenting, I could have deleted the first draft. I left it to show how the “is” and the “ought,” accident and necessity, can co-exist on this screen. If I wanted, I could remove the offending passage from the screen but not from the memory, thereby creating an archive of my repressions while denying omnivorous Freudians and virtuosi of variant texts the pleasure of conjecture, the exercise of their occupation, their academic glory. This is better than real memory, because real memory, at the cost of much effort, learns to remember but not to forget. Diotallevi goes Sephardically mad over those palaces with grand staircases, that statue of a warrior doing something unspeakable to a defenseless woman, the corridors with hundreds of rooms, each with the depiction of a portent, and the sudden apparitions, disturbing incidents, walking mummies. To each memorable image you attach a thought, a label, a category, a piece of the cosmic furniture, syllogisms, an enormous sorites, chains of apothegms, strings of hypallages, rosters of zeugmas, dances of hysteron proteron, apophantic logoi, hierarchic stoichea, processions of equinoxes and parallaxes, herbaria, genealogies of gymnosophists— and so on, to infinity. O Raimundo, O Camillo, you had only to cast your mind back to your visions and immediately you could reconstruct the great chain of being, in love and joy, because all that was disjointed in the universe was joined in a single volume in your mind, and Proust would have made you smile. But when Diotallevi and I tried to construct an ars oblivionalis that day, we couldn’t come up with rules for forgetting. It’s impossible. It’s one thing to go in search of a lost time, chasing labile clues, like Hop-o’-My-Thumb in the woods, and quite another deliberately to misplace time refound. Hop-o’-My-Thumb always comes home, like an obsession. There is no discipline of forgetting; we are at the mercy of random natural processes, like stroke and amnesia, and such self-interventions as drugs, alcohol, or suicide. Abu, however, can perform on himself precise local suicides, temporary amnesias, painless aphasias." [Abu is the name of the digital machine and italics are mine.]

And since I never go directly for the obvious and always revolve around the subject to discern it from its peripheries, it seemed like a good idea to try to write about the practice, or better put, the movements of forgetting since I have a lot of experience in that subject: I've - most of the time - deliberately forgotten and continue to forget many things. It's more like a habit. Or maybe I should say that I operate on whatever is attached to the thing I desire to forget.

First rule of forgetting: you do not talk about... oops sorry, that was Fight Club...

Where were we? Oh yes, forgetting... so, it was close enough to Fight Club as well.

Anyway, the first rule of forgetting is not wanting to forget! (It is so deliciously paradoxical that I had to stop and enjoy the thought for a few minutes! It is moments like these that make me lose track of my own thoughts so I cannot promise much coherency from now on - as if I ever had a claim about coherency!)

So, if you want to forget, you should not want to forget. Instead, you should will to remember and face your accidents, as Eco puts it. Life is a series of accidents. In philosophy, accident is mostly understood as the things which happen to you, in other words, the events of your life. This has been a major topic in philosophy, discussed in depth since Aristotle but for our purposes here, it would be enough to define accident as experience. The object of the act of forgetting is necessarily an experience, right? An experience of some importance. Nobody would bother to forget insignificant or trivial experiences such as going to the store to buy cigarettes etc. So, what you try to forget is always something that makes you feel in a certain way, be it pain, sadness, shame or sorrow...

That certain feeling attached to the experience indicates the forcefulness or power of your experience, in other words the problematic nature of it. That means it has a power. A potential waiting to be created to transform you, and once you become a new person, that is, once you change your plane of operation, the accident you wanted to forget ceases to be itself as well.

These powerful experiences are real questions, and being real questions, they don't have an answer. What is a real question? I feel like it is the creator of a particular truth. Truth, even the emphasis is on the particular, never wants you to give an answer to it. It pulls or pushes you to believe or not believe it. You are kind of helpless on that plane, at the mercy of a certain arrangement of forces. So, you have to jump on another plane where you will meet the light coming from the crack the question created. There always is a crack. And actually you use that crack like a pole to jump onto another plane. Trying to forget won't help because you will be under its power, entangled in its mesh, it will force you to do something until you do something. You can choose to repress it, and by doing so stay within that force zone but that's how various disturbances originate on various parts of your body and not only in your mind.

Anyway, you have to want to change your plane rather than wanting to forget; that is to arrange yourself differently, to change your patterns... You can start with really small and concrete things as well, like literally arranging your home differently even if its imaginary. Let me give you an example:

A few weeks ago, I was trying to forget some pain and in such a state that I didn't want to do anything. I didn't want to work, to read, to watch movies, to go out, to talk to people. I mean nothing... I was constantly procrastinating in front of the computer, telling myself that I will work at some point while surfing on the online shopping websites meaninglessly since I wasn't buying anything. Days went on like this. At the end I had arranged a virtual new home, existing only in the shopping lists of the websites. At some point I asked myself, "What the hell am I doing?!" This looked so meaningless, so null. But it wasn't so... I actually had transformed the apartment where I work and live, basically spend most of my time, and it didn't need to be real. I needed a new perspective so my procrastination was showing me the way. What I was reaching for was not only different furniture, different arrangements but a different life. I came to this conclusion by tracing myself, and asking on the way, "What could this mean? What does it do for me that I feel better having this couch here and this table there only in my mind? Hell, it wouldn't make any difference even if they were here." But believe me, your mind is much like a home, arranged in a certain way that enables you to do certain things, like sitting comfortably where you get sunlight or being stuck and uncomfortable under bad illumination. Changing such a small thing as illumination enables you to do different things with things illuminated. A painful memory could be made something creative this way, if you follow the pain through its path of origination which seems to me to be basically the crack of the question.

On the other hand, you could be trying to forget an event which, at the time, gave you pleasure but now became a source of pain since you are no longer able to experience it. Well, pardon me, but this would only show your limited understanding of that event, your restricted ability to recreate and feed on that pleasure. The movement to make in this situation should be searching the ways to make that event or experience productive for it to be a source of ever more pleasure.

So jump off that plane. I know it's easier said than done. But once you manage to do it once or twice, you'll see it's more of a matter of athletics - much like pole vault really - rather than a conscious effort - not that I know anything about conscious efforts... It's quite true though that it cannot be really taught. You have to do it yourself to learn. At the end you might even make it a habit like me but I don't really recommend that. Because then it kind of becomes impossible to stay on one plane for long. You just want to jump! Plus, since we are living organisms, we cannot really be as precise as Abu in our local suicides. One of these days I may perform my last jump...well, nobody said it was safe, but it's fun and it's the least I can do. For now. 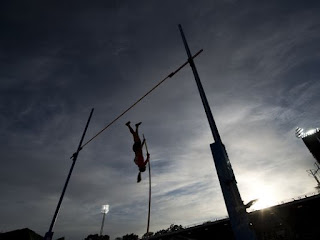 P.S. This is an old post which I wrote exactly one year ago today apparently and never finished until today. It's what jumping does to you: you have trouble completing things. Ah but I finished Foucault's Pendulum. Books, I always follow to the end. And I am still jumping and not completely dead yet.