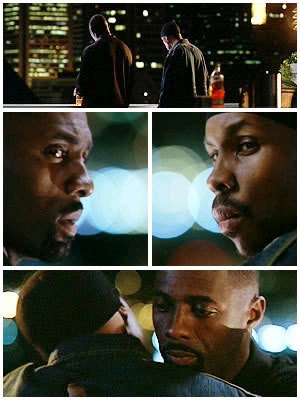 You should know The Wire, the most beautiful TV show ever, and not only in my opinion. Since I watched it, and I admit a little late, in 2009 or 2010, I don't recall exactly, I made a habit of making some of my friends watch as well and watching with them all over again. And it was interesting to ask them which character they loved the most. Of course it's never only one character. It's such a show that you love all the characters, even the bad ones, with a few exceptions maybe. But there is always a top three, and the first one, I think, gives away what you're about yourself. The character you love the most is the one you identify with on some fundamental level. We've had rich conversations, shedding light on ourselves as well as the characters in the show.

So, mine was Russell Bell - a.k.a. Stringer. But I haven't been able to figure out exactly why I loved Stringer - he is not usually loved that much - the most until recently. He was always a hero in my opinion, although a little degenerate. His fate made my heart hurt, kind of like a tragic hero. He tried to get out of the thug game in the streets by trying to get in to the bigger and official game of real estate. He studied economics in the university while laundering the drug money, establishing corporations and buying huge amounts of real estate. He was a business man, not a gangster. He didn't like all the killings that brought the police on them. He was trying to become legitimate while Avon - his childhood friend and the king of West Baltimore's drug trade - was conducting the business like a war. Avon was fighting to keep his corners, dropping bodies here and there to intimidate competition while Stringer was thinking that this was stupid. As a business man, not a soldier, Stringer thought that they can get out of this mess altogether if they were smart enough to get legit. So he contacted Clay Davis, a corrupt politician, who stole much of his money and fooled him by giving promises about approvals of real estate licences through his contacts in the high places. We watched Stringer, that cool character, becoming helpless day by day, getting angry, and once he fully understood that he has been fooled, he completely lost his cool and went to Avon trying helplessly to convince him to kill Clay Davis.

All this makes sense in the story. What didn't make sense for me was the reason why I was so impressed by Stringer... I have no inclination whatsoever for business. I am not a business person, in fact I am the opposite of that. So, it couldn't be the business aspect of it all. Then, the other day, while I was reminiscing about Stringer and mourning, it hit me: I loved him because he had a problem with the reality. He didn't accept reality as it is. They were drug dealers coming from the streets and that was it. Avon, for example, in all his naivety, had never suspected that it could have been otherwise. But String thought that they can actually change their reality if they're smart enough. It was only a matter of money, the world was revolving around money and they had enough money now to get out of their illegitimate lives. He studied economics in the college to get to the bottom of the whole system. He educated his crew, forming some kind of college atmosphere at their headquarters. Oh, what a beautiful scene that was...

Anyways, Stringer, in his quest, found a solution out of his reality into to the bigger reality - outer wheels of capitalism - and it is here Philip K. Dick enters the scene for me. Stringer, although smart and educated, followed a solution involving faking the bigger players in the bigger game. If everything was about the money, why not use the money accordingly and enter higher society as one of its members, right? Why not act, work, dress, talk, and walk like one of them? That should be enough to jump from this plane of reality to the plane of another, one that is actually running the business. But it wasn't enough. Stringer is a fake fake, in PKD's term, in the fake capitalist world. What does that mean? That means an authentic being in a fake world. The capitalist game in higher places was - is - much more cruel, sophisticated and most importantly fabricated than the game in the streets. While Stringer was the cunning one in the streets of Baltimore, the throne of cunning belonged to Clay Davis at that higher plane because Davis was already a fake, through and through. He was already a fabrication of capitalism and bureaucracy. He belonged to that plane, and as such, he knew the topography, the paths, the nature of that fake world by heart while Stringer, in all his authenticity, was a complete stranger there, ready to fall prey to Davis. Stringer believed that there was a way out of his reality but he couldn't realize how sophisticated the game was on that other plane. He was a stranger, a fake in this other world merely due to his belief that he could change the game. Nobody believed anything up there. Up there, there was - is - only the inherent acceptance that the world is already fake and that's how it goes. That's why we saw Stringer as helpless as he can be when he encountered the ultimate illusion. His very core, his being was shaken before Clay Davis. He was not that helpless even when he understood that he's going to die. Because he understood that. His death was a result of his doings and he knew that it was fair. Clay Davis, on the other hand, represented something that he cannot possibly understand without ceasing to be himself. What made Stringer himself was believing in another world and when that was taken away from him, he was left with nothing. Sigh...

Before I linked Stringer's problem with the problem of fake, I had thought that he encountered his demon in Clay Davis, his mirror twin. After all, Stringer was very much the Clay Davis of the streets. He was the most cunning of them all: killing D'Angelo behind Avon's back, cooperating with people he shouldn't cooperate, snitching on Avon, deceiving everybody that he thought he should deceive in the name of business... Those are not good deeds. And when he encountered Clay Davis, I thought "Well, yes, this shitty person is probably the Stringer of high places." It was as if he was looking in a mirror, but one that shows the image much bigger. Stringer had, or he thought he had, an understanding with him. But then, I realized that there was something fundamentally different between them. One was sincere, even in his most harmful deeds while the other one was... well I can't find another term: fake.

Then, all of a sudden, this whole thing seemed to me to be related with resistance somehow, more specifically, with Gezi Resistance. Why did we resist? Because we believed in another world, not the world they imposed on us. And who did we resist against? Them, our versions of Clay Davis. The fakes of this geography. Them, who are able to use everything and anything to get their way. Them, who are inferior to us but somehow who are governing us. Them, who impose their vision on us. Them, who do not believe in anything other than money. And, I realized, the reason of the resistance being such a big deal and also the reason for our exhaustion (I had a few nervous breakdowns, for example, and many are feeling the same way now) was that we found a solution quite similar, yet different to the one Stringer found. We, the common mind of the resistance, were faking the fake. It was our method. They were already fake, and moreover they were bringing forth absurd, even surreal arguments such as the resistance being financed by foreign powers and organizations which do not even exist; some men dressed in leather with whips in their hands abusing a head scarfed woman and her baby and peeing on her; that we were trying to manufacture an atomic bomb in the tents in Gezi Park, etc. The list is too long to include everything here but you can see the surreal quality in all this. So, our minds were forced to go to the limit. We started to produce fakes everywhere, fake arguments, fake happenings, fake news much like Onion's. We opened pages on Facebook in the name of these non-existent lobbies they were talking about as foreign organizations, we opened Twitter accounts in their names to make their parody. We had fun like hell as well while doing that. And they were pathetic because they didn't expect this. They thought that we would take a defensive position against their absurd arguments and then, we would be on their plane to comfortably attack. We actually won by taking the battle on another field. Our intelligence and authenticity won over their stupidity. We know that. But the thing was we weren't fake, and they already were. We believed in changing the game, and they were playing it relentlessly. So, at some point, we were exhausted of all this nonsense but they weren't. They continued bullshitting. And they still are. But we are tired now, at least I know I am. We want our sanity back. They don't need sanity (they have been born and raised in a world of insanity - now I understand better why PKD keeps calling evil insane) but we do. So, it appears now as if they won. We know that isn't true but nothing much changed since then, moreover it became worse lately with this internal security package they got through the parliament. Anyway, I didn't actually mean to go into these things but I can't help myself.

Actually what I wanted to say was this: it's a smart solution to fake the fake as Stringer did. But the problem is, for Stringer as for the resistance, the authentic can fake the fake to some extent. After that, a disintegration occurs just as the experience of PKD's characters. The authentic cannot hold itself together in a fake world. It cannot communicate with the rest of the world whose reality is quite different. The authentic person's strength which is believing in himself and his dreams becomes his weakness when he's faced with the all-encompassing illusion which is capitalism in its deepest form in the world we are living today. He cannot fake enough to be a real fake. And this is the very personal doomsday that everyone experiences privately. This is the tragedy linking Stringer to resistance and to me. Of course, Stringer won if you ask me. He won because he was - is - superior to Clay Davis with his authentic reality. That's why he, not Davis, is the one we remember. And Gezi was a success no matter what happened next. I don't believe in their fabricated reality. One day, it will shatter; it's already shaking but one day it will be destroyed completely and we will be there to watch with great pleasure because we are the real reality. We still having a charm of reality in our hearts. "Us motherfucker..."

P.S. After I wrote this and was searching for some images I can use, I stumbled upon this article. So, I wasn't alone in thinking he was tragic, although the article's context differ from mine, fortunately.
Posted by ayşegül at 6:01 AM