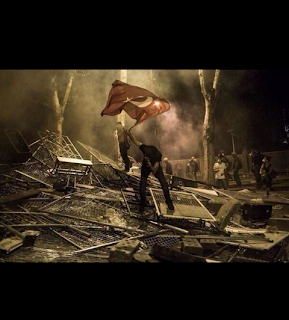 Today is the 18th day of our resistance in Gezi Park / Istanbul. You most certainly know about it wherever you are since it has been a popular news for the world press from the day it began. There are lots of reasons for all the attention but what we can simply say is that you find everything in this nationwide story. It is an intense thriller, drama, action, romance, comedy, documentary, and even film-noir. Of course for certain other countries some of these qualities prevail over others. It is seen as an uprising of Turkish people. It certainly is but I don't think that the whole atmosphere of this revolt is understood by the world in all its extensiveness. What I attempt in this series of essays is to give a little taste of what this legendary resistance actually is for us Turks and how it transformed us.

It all started as a little protest against the demolition of a park in the heart of Istanbul. But right after police intervened violently to the people - there were only a few hundred of them if I am not mistaken - who moved there with their tents, things got out of hand in a very surprising way and protests spread like wildfire to the whole country.

I was there from the second day onwards (May 29th) when the police removed us from the park again and from Taksim Square using tear gas and riot controlling vehicles and did so with "disproportionate force" while occupying the whole area. Although it was a surprise even for us how this protest about a little park (!) became a resistance, it was not really a surprise for it to spread to the whole country as a "resistance" to the government since it was not about a little park even from the beginning. It was about the oppression we have been experiencing from this government for over 10 years and at the end we collectively said "enough is enough!" as you know all fires start with a little sparkle.

If we are to track the road that led us to this point, we can name more than a few things. The first things that come to my mind are mainly related to personal liberty. Although they were known as Islam oriented for all the years they were in power, they had the support of many different people, even the leftists (yes, that was something I have never understood too) since they used the discourse of being oppressed Muslims from the birth of the republic. They said "our women are not able to go to college because they wear turban." I remember many of my friends supporting their protests in college but nobody seemed to remember that "turban" was not actually about sincere religious beliefs but it was an ideological symbol for the long tradition of political Islam that we had to fight since their aim was to bring religious law (which doesn't allow any other freedom than that of being a Muslim). Turban was a different way of wearing head scarf that emerged right after 1980's military coup d'état which was a big step backwards for the country. Anyway...

When they came into power, they de facto allowed turban almost everywhere although they did not passed the law yet. And we heard news of women doctors not treating male patients etc. This was only a small piece of their setting up their own cadre in the public offices. Of course, executive and judicial powers followed legislative power.

They put many journalists, professors, military men, political party members and heads as well as members and heads of NGOs into prison accusing them of plotting a coup d'état against the government by establishing an alleged organization named Ergenekon. We protested this as people who know that this was also a part of their "cleaning" in order to set up their own cadre but many people has seen this as a real cleaning and democratizing the state. So, we forcefully swallowed this.

Then came the education. They changed the whole education system with their own "brilliant" system which basically "revolutionizes" education by making it "optional" only to increase the religious high schools' admission rate. We swallowed this too of course after protesting a little.

They pressed charges against humor magazines for joking about the prime minister; they banned many websites (like youtube); they prohibited the access to Internet with the discourse of "clean Internet"; they covered up many events in which a lot of people died (for example Uludere massacre for which a lack of jurisdiction decision was taken just a few days ago).

But all this wasn't enough for a mass protest since almost all were attributable (or attributed by force) to some ideology. Since 1950s, we have been gradually divided into different groups of people opposing each other as Kurds-Turks, Muslims-atheists, nationalists-liberals, right wing-left wing, and although we have a strong memory of uniting for a common purpose (from our War of Independence), all the efforts to plant hostility among us were pretty successful. We were simply  afraid of being involved in politics at the very least even if we did not believe in such oppositions. Politics was a dangerous game for all involved. People were beaten to death, tortured, murdered by unknown assailants, bombed etc. for being involved in politics. Especially after violent 1970s, a whole generation was raised with a strong apolitical inclination. Actually, we developed a strong sense of humor in order to cope with all the injustice.

But thanks to the present governing party's move to take it many steps further, we began to see that not being involved in politics doesn't save anyone. They started to interfere in our personal liberties and that was what drove us to the edge nationwide. That and our wounded sense of justice.

We heard of little girls (12-13 years old) being raped by 20-30 men. You would think the men doing this would be sentenced in a state of law, right? But on the contrary, these men were acquitted and the little girl was accused of turning them on willingly. Of course there were reactions against this injustice but at the end we swallowed it since we have a long tradition of injustice. Simply put, we were used to it although we could never get used to this level of injustice... This is only one example to give a sense of the set of mind we are dealing with here.

Another recent event to hurt our sense of justice was the bombings in Reyhanlı, a small town on the border of Syria, which caused more than 50 innocent people's death according to official numbers (the rumor is that the number of deaths is actually 500). The bombings were attributed to Syrian government although they openly declared they had nothing to do with it and also they had no motives to do such a thing. They proposed to investigate it together with the Turkish government but it was refused. Actually, bombings were the result of the Turkish governments policy to open our borders to the terrorist organization (Free Syrian Army) working against the Syrian government. I don't ever want to use this label (terrorist) for anybody but after seeing them and what they do to people (they cut people's chests open and eat their lungs while saying religious chants) I don't hesitate to do so. Our prime minister called them "freedom fighters" while defining them as his "brothers" who are oppressed by the Syrian government. He opened our borders to them in order to save them from the "cruelty" of Syria but he did not care about his own people dying there because of this move. He just went to USA to meet with Obama instead of visiting Reyhanlı. These events wounded the sense of justice for all of us regardless of ideology and made everybody suspect of the PM's intentions for his own country.

All of these went hand in hand with personal liberty issues. Prime minister started to advise us in many personal areas such as...
The number of children we should have - it is 3;

How we should behave in the public - just a few months ago, an announce was made in the metro advising people to behave according to moral values. The cause of this was a young girl sitting on her boyfriend's lap. This announce was protested with a kissing protest in which couples kissed each other in front of the metro entrance but they were attacked violently by people with chopping knives.

What we should eat and drink - according to him we shouldn't drink wine but eat grapes since wine is made of grapes. Again to his opinion, our national drink is not rakı (our alcoholic drink) but ayran (made of yogurt and water).

Abortion and birth control methods - although abortion is still a legal right according to the law, it is now de facto prohibited in the state hospitals. Husband's permission is required for married women and single women are getting flagged if they apply to a state hospital with such a request. There were reports of young women whose fathers or husbands were informed by telephone after they applied to hospitals with the demand of abortion.

The prohibition of selling alcoholic drinks between 22:00-06:00 and all kinds of advertisement of such.
So on...

And we cannot ignore all the bad language PM and the members of governing party used during these years. He called the founders of our republic "two drunks". They said they would "spit on" art works. They said ballet turns people on sexually so we don't need it.

To cut a long story short, people united in the hatred of Tayyip (the PM but we call him with his second name since his discourse is also not very polite) and AKP.

I don't want to postpone publishing this. So I am cutting it from the middle.
Enough with them.

To be continued with our story: better, funnier, smarter, more painful but more humane one.
Posted by ayşegül at 7:51 PM