How do you know somebody? Is it his face combined with his name that makes you think you know someone? Is it what you share with each other such as memories? How do you recognize someone as that particular person? Recognizing someone is somehow magical on the contrary of rational assumptions. It is his whole being you are acquainted with when you meet a person. There is always something about people that you cannot express, that makes you want to stay around a little bit longer or to run away as fast as you can.

What is this "whole being" if not his name, personality, appearance, behavior combined? I would say it is the essence of the people which could be very different than how they appear. And this is almost always the case if you are lucky enough to meet interesting people. What I mean by "appearance" is the generalities that we - as social beings - share, categorize, use to position ourselves in the midst of others. A very simple example would be being polite. Socially acceptable way to navigate within the social without getting harmed since you don't pose any threat to anybody by being polite. You pass the initial test, as it were. But is this the case in reality? What appears to be a polite gesture could very well be a threatening act of aggression in some cases. I think we all know what that means.

So there is another layer which is not apparent but makes itself felt. The above example is a very simple one so it has no power in making us understand the depth involved in this subject. The categories such as polite, rude, asshole etc. are only useful when they are represented in the consciousness of a social. I mean you can very well talk about a person to another and say "he is polite" or you can just tell what he did, like "he opened the door for me, waited me to get in, then he asked how I was doing and about my family and friends, and so on..." but as you talk you realize that there is something very important missing in this scenario, that thing is how you actually know that person, it's his whole being. Impossible to represent like this. If you want another person to know someone, you would have to express the affect he has on you, not the facts.

As far as my own experiences go, I apparently have a tendency to become involved with people who are very difficult to talk about in the plane of social. Of course there are many people about whom you can just say "polite" for example and that would be enough since they are immersed in the social in the very core of their being and they operate in that plane only. They resemble each other even when they are in very different areas of a social structure. They assess each other in the same way, they know each other like members of the same species. Know when to back off, when to attack. It is almost like watching a documentary on animals. Funny and interesting in this sense. But I have to be in a very, very good mood to find this interesting and it doesn't last long. It is boring when you get the dynamics which doesn't change much. Those people I call fake in the sense of fundamentally corrupted, so fundamentally that they think the social is the real since it is their only reality.

There are genuine people on the other hand, hopefully. These people always require an effort on my part to explain to others since what they appear to be doing is almost always very different than what they are actually doing. There are gaps between their outside behavior and actual affect of their existence. Now as I write it seems that these people should be called fake. If we were trying to communicate on a social plane that would be the case. Their social behavior is fake, it is true, but this fake indicates a genuineness which is not, could not be incorporated in the social. They are like wild animals who are not part of a herd, who only come to communicate with the herd for reasons of survival. Maybe when they need protection that only a group of individuals could provide by the sheer force of their numbers. Maybe they are starving and need to hunt with the herd or within the herd. Well, it is always within the herd when it comes to sexual hunting for example.

Back to my point. Hm, what was it... Oh yeah, I wanted to talk about the magic of knowing people. Sorry, I got confused on the way. This confusion is the magic that I find fascinating when meeting new people. Most of the time there is no gap between what a person does and the affect of him. They are 90% very decent people. So decent that there is nothing left to imagination. They have a job, they have a family, they have 5-year or 10-year plans about what they are going to do. Even in their relationships with the opposite sex, they consider their plans and calculate the benefits and losses, only then they decide to go on or to part ways. They live in the social even in their bed. It terrifies me to even think about such an existence. It maybe very secure but, you know, the prison is the safest place. They are volunteers to be prisoners just for the sake of the security social provides. What is worse is that usually they don't know it. If they had such a thought, that would put them in contact with another realm other than social, so they would be a little more interesting which contradicts with their very existence.

People I love to be around are "assholes" which can also be very "polite". But neither "asshole" nor "polite" is enough to describe them. These adjectives are always in quotes. The thing I feel when meeting them is this fact: their adjectives are in quotes. So begins a journey to unknown. Unknown for me as well as for them since before this has been said, they had been in agony thinking that they are fake (if they have a strong inclination to the social) or they had been just aggressive to the point of self-destruction (again because of the feeling of guilt deep down due to not fitting anywhere in the social or natural scheme). Having another perspective such as this opens another way. A confused nevertheless creative way. They always have a dark side that social cannot shed a light upon. Making this a source of creation rather than self-destruction is the challenge. This is the magic out of which new ways of doing things come from.

The question I ask myself still stands though. How do I see the quotes? How does this recognition take place? Why I am never satisfied with pure decency? Maybe because I feel it is not pure. It is the corrupted. The dark appearing as light. Maybe it is something like knowing your own species instinctively. Magic happens everyday, in every actual encounter. But magic always happens in other layers of experience, ones which cannot be pointed out. The only expedition that is worth embarking is on these layers where the magic happens.

Of course this is only my point of view. Still I think that world would be a much better place if only there was a way to make everybody understand that magic is real and is found in the unknown planes of our very own existence. I could have been a very lovely dictator I guess... nevertheless dictating. 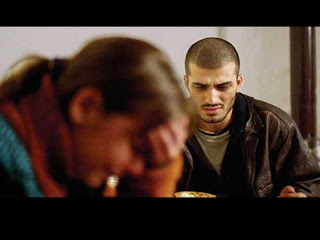 About the image: It is from a wonderful film ("Kader" which means fate) of Zeki Demirkubuz (a Turkish director) whose movies are very dark. In that darkness one could see the light of being human to the point of not being human anymore. I should write about this movie exclusively some time.
Posted by ayşegül at 3:46 PM